Incorporated in 1805, Genesee County sits on the region’s western border between the cities of Buffalo and Rochester, with Batavia as its county seat and largest municipality. Genesee is one of nine counties in the Greater Rochester Region – Genesee, Livingston, Monroe, Ontario, Orleans, Seneca, Wayne, Wyoming and Yates. Genesee derives its name from the Seneca word Gen-nis’-hee-yo, meaning “the Beautiful Valley.” Genesee’s standout attributes among the region include a low cost of living and a strong tourism industry anchored by Darien Lake Amusement Park, several golf courses, and Batavia Downs racetrack and casino.

Among its strengths, Genesee has relatively high revenue from tourism and strong growth in average salaries. The average salary in the county, adjusted for inflation, increased by 13% since 2000, more than the state or the nation. However, the county has also been losing population and saw increases in poverty: total poverty rate rose by 3 points and the child poverty rate rose by 9 points from 2000 to 2014-18, which was the highest rate of increase in child poverty among the region’s counties.

See below to access the latest Genesee County Report Card, or a summary table of "Hard Facts" impacting this particular part of our region.

Now available, view and print a summary of how Genesee County is performing on ACT Rochester indicators.

The Genesee County Report Card aggregates data from more than 100 community indicators on the site and use symbols, colors and arrows to provide a quick, at-a-glance overview of the well-being of the county. This data covers each of ACT Rochester's nine topic groups. Click on the picture below for the full report. 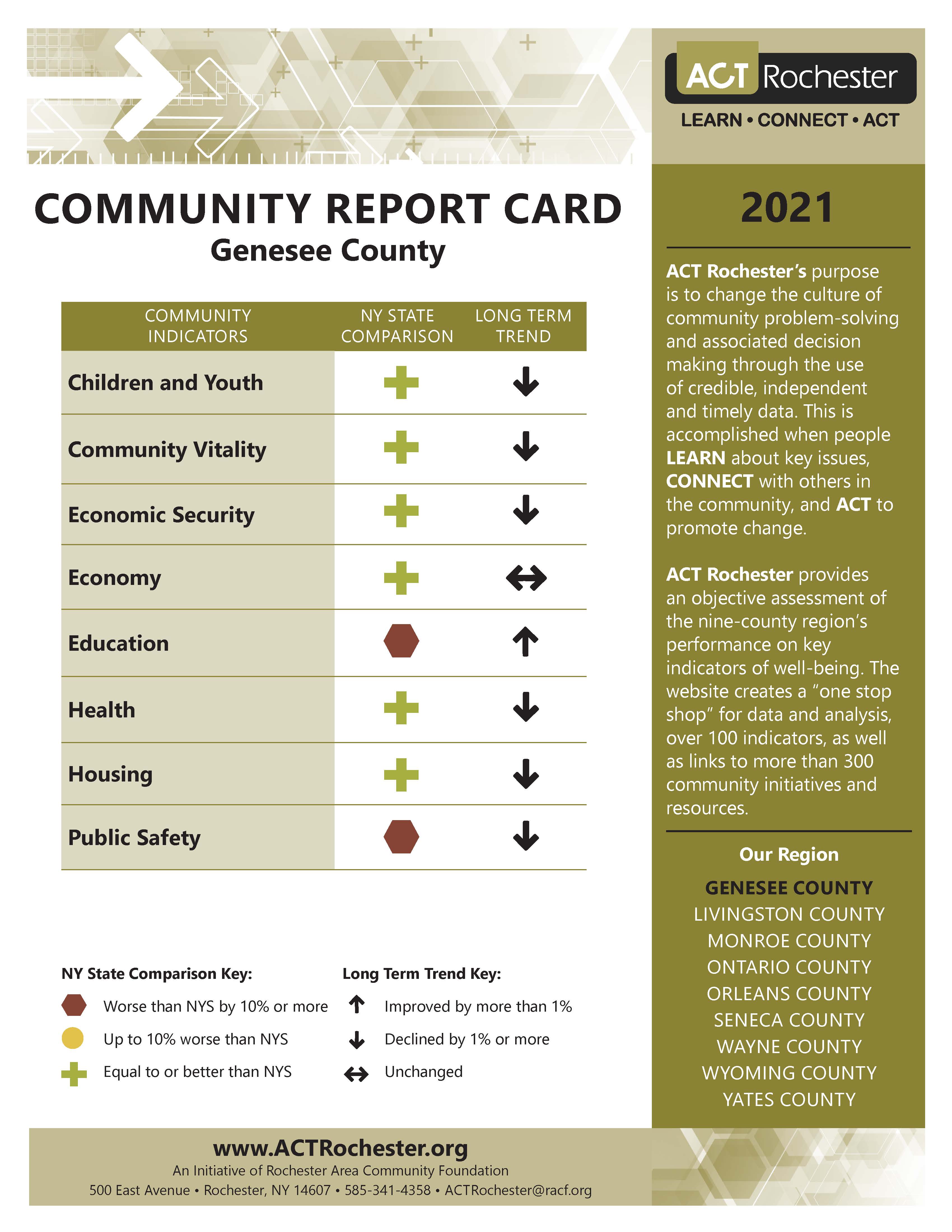 In 2017, ACT Rochester released its latest race report, “Hard Facts: Race and Ethnicity in the Nine-County Greater Rochester Area” to examine the substantial gaps in educational and economic outcomes among persons of different racial and ethnic backgrounds. The table below highlights some of the disparities currently impacting residents in Genesee County. Click on the picture below for a pdf of this table.