Monroe County is the region’s urban center and reflects the highs and lows, and stark disparities, of the Finger Lakes region. It has the most educated adult population and high-performing suburban districts but also the highest child poverty rate and the lowest high school graduation rate. Monroe is the most diverse county and home to most of the region’s arts and tourist attractions.

Monroe is by far the largest county in the region, with almost two-thirds of the total regional population, giving it an outsized influence on regional statistics. Monroe is considered home to the urban and suburban portions of the census-defined Rochester Metropolitan Statistical Area (MSA), while the counties of Livingston, Ontario, Orleans, Wayne, and Yates comprise the exurbs and rural areas of the metro. All municipalities in the MSA with over 25,000 population are within Monroe County.

Monroe contains many of the most visited and well-known tourist attractions in the region, including The National Museum of Play, The George Eastman Museum, The Memorial Art Gallery, Seabreeze Amusement Park, Mount Hope Cemetery (home to the remains of Frederick Douglass and Susan B. Anthony, among others), Seneca Park Zoo, and Highland Park (site of the Lilac Festival). In particular, Rochester hosts many well-attended festivals throughout the year, including the Lilac Festival and the Xerox Rochester International Jazz Festival.

Rochester is home to many prestigious colleges and universities, including the University of Rochester, Rochester Institute of Technology, Nazareth College, SUNY Brockport, and St. John Fisher College.

Throughout most of the 20th century, Rochester was known as headquarters of the “big three” imaging companies – Xerox, Eastman Kodak, and Bausch & Lomb – which together employed more than 15% of the nonfarm employment in 1981. However, their role as anchors of regional employment has abated as Kodak emerged from bankruptcy in 2013 and Xerox and Bausch & Lomb have moved their headquarters from Rochester. Today, the top regional employers are the University of Rochester, the Rochester Regional Health System, and Wegmans.

Various indicators highlighted below will include a comparison to the City of Rochester. Rochester has long struggled with entrenched and concentrated poverty, which is reflected in sometimes striking disparities between the city and the county for economic and quality of life indicators. It is important to note that the Monroe County figures all include the residents of the City of Rochester. Comparisons between Monroe and Rochester should not be interpreted as comparisons between the city and the suburbs.

See below to access the latest Monroe County Report Card, or a summary table of "Hard Facts" impacting this particular part of our region.

Now available, view and print a summary of how Monroe County is performing on ACT Rochester indicators.

The Monroe County Report Card aggregates data from more than 100 community indicators on the site and use symbols, colors and arrows to provide a quick, at-a-glance overview of the well-being of the county.  This data covers each of ACT Rochester's nine topic groups. Click on the picture below for the full report. 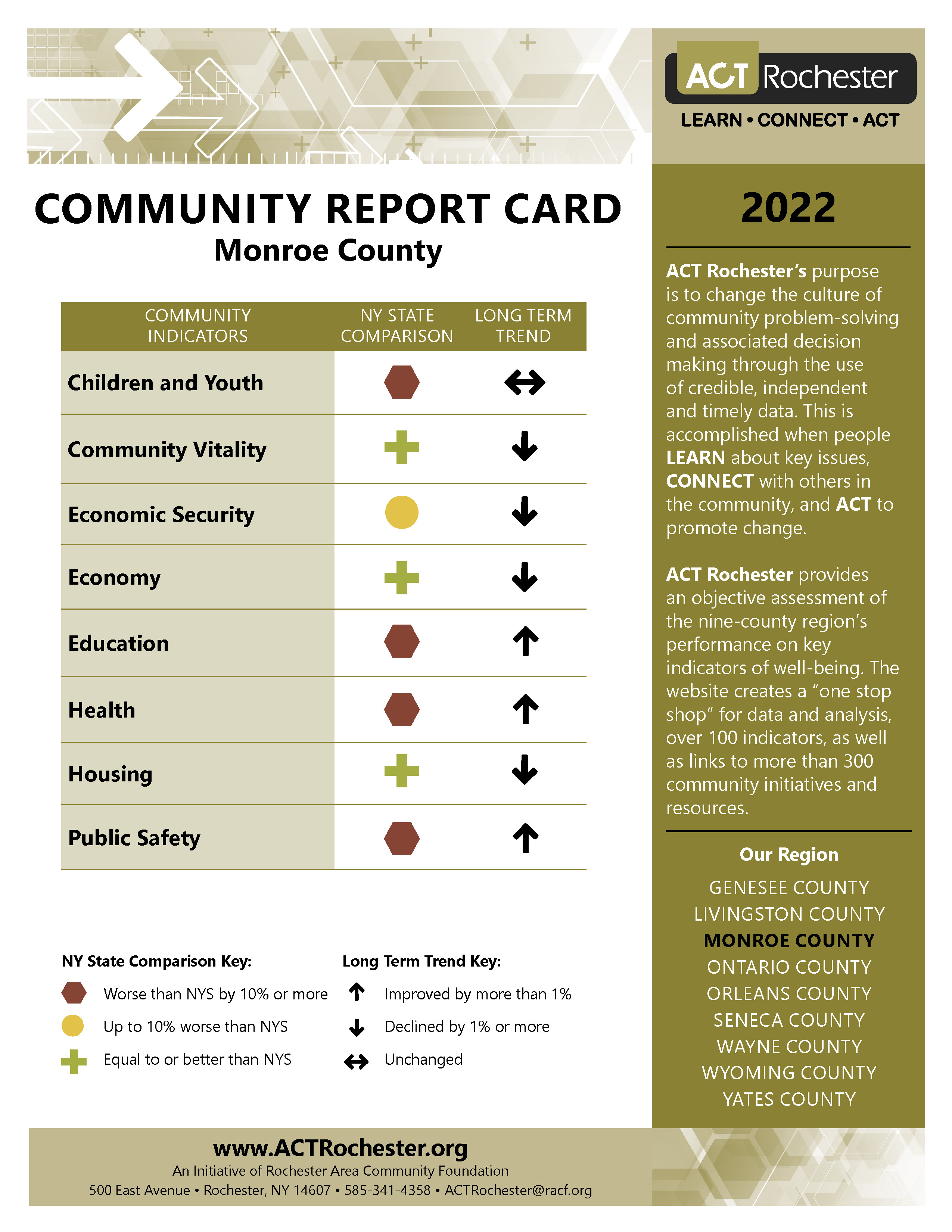 In 2017, ACT Rochester released its latest race report, “Hard Facts: Race and Ethnicity in the Nine-County Greater Rochester Area” to examine the substantial gaps in educational and economic outcomes among persons of different racial and ethnic backgrounds. The table below highlights some of the disparities currently impacting residents in Monroe County.